Hey @Ryan have a good day Have you new Plugin for Battle Arena ? can it work ?

I was looking to forum and suffering from the a situation. Ok we have some plug in codes but we don’t know how we can use them ?

For instance, In some of plugs we need stay in town but what we should do ? Should we create a script or will we just stay afk like doing nothing ? How we need to create script from beginnig of teleportation point or start script near the arena manager ?

When we posting some of plug ins (thanks to creators cause I don’t even a language) Can you please inform about instructions.

I hope I could be clear thanks…

I think the subject has already been processed

[quote = “Ryan, post: 3, topic: 346, full: true”]
All you do is argue in your script when in front of the NPC. It registers for the current active arena type.
[/ Quote]
i think u need use in the tab returne and specifi return every xx time ( when the battel arena start )

or u can try to mak script add the npc battle arena and use this function return at xx:xx every day ( specifi the time when batell registration start )

Should we change town script for it ?

Anyway I have some of junk chars. I want to register them to arena. They don’t need to go training area.

Which steps should I do ?

Regards
Did it work? Where to add the “arena” command indicated by the administrator? I write it just like that? to the script?

of the testing release, Python 3.4 plugin support has been added. Plugins allow you to extend the bot with Python by sending packets or starting/stopping the bot.

Any .py file you place in the ‘Plugins’ directory will be loaded at runtime. This requires you to also have the Python 3.4 ‘Lib’ folder inside ‘Plugins\python34’. It is included in the download below.

An example Python script has been included to give you a list of available functions. You should not call any functions that return a lot of data (eg. ‘get_inventory’) very frequently otherwise it will increase the CPU usage significantly.

just copy past the script on new doc called xxxx.py ( arena.py for example ) then add it on " plugins " on your directory

There should it be loaded already? what I have to do is use teleport every so often in “return” and he will go through the “arena manager” and register?

Thanks for your kind help, I’ll try.

maybe u can found what you need

That’s not going to work because 1 minute will not have passed after using a return scroll. You should combine them instead.

i dont use script for arena now.
because i found a better then method.
Arena plugin is running arena time and you just need to be in the town.

Set the hours according to your server. 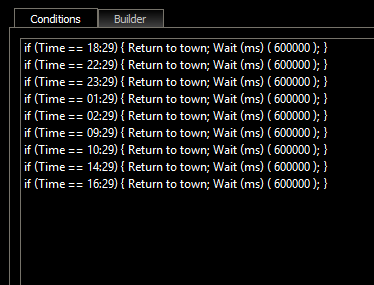 thanks for sharing, bro.

Can you tell me how brother did this?