hey , it happens a lot my client freeze when I click go client or when I set bot to login as client , it happens randomly
and when this happens I have to force close the client with task manager then I have to relog the char
I feel it’s game problem not bot cauz same happened with other bot
but can you help ?!
any solution? 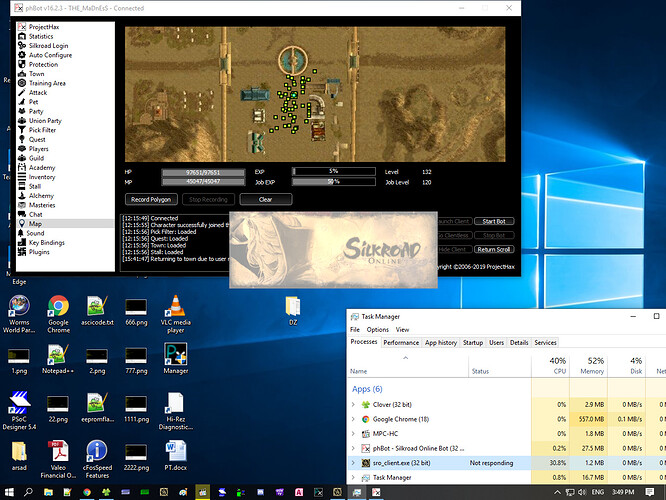 Have to just keep trying. Joymax screwed up GFXFileManager from what I can tell.

i have the same problem and i cannot figure it out. it s so annoying

Possible fix. I can’t login to test and it only randomly occurs for me.

I see a few people were able to try it. I deleted it since I don’t think it did anything. I plan to release 21.8.5 soon which has a few improvements that do seem to help. It’s nearly impossible to know for sure since it occurs randomly.

I teleported back and forth 20+ times when going client and it crashed maybe one time and there was no error window.

Also, I made some improvements for CrapTrap which will detect the error windows and restart it if they occur.

The errors are coming out of GFXFileManager which was recently updated. It seems to be from when it loads a file from the PK2. I don’t know what the dialogs say since the text is Korean but not translatable because they call the ANSI MessageBox function. So, there’s no way to know what the error is for other than the title occasionally having the file it failed to load.

yea it’s a game problem not bot problem and it happens since last joymax update
the only way for now is to do “go client” “go clientless” from manager until it goes client successfully
do this until joymax fix this again.