i remember that i already did some thread about a similar case.

right now, i am just working on two characters. both are doing the inventory expansion 2 quest and collecting mage charms.

both are CH, have a glavie and wear armor. they have no pick filter instead of mage charm, no special setups, no attacking skills, no imbues, just normal attack. no auto stats, no return to town, no potions, just nothing.

when i use a radius @ training place and checked collision detection + navigate around obstacles, they just stuck and doing nothing almost after each kill. no, i havent checked “dont walk around”. it doesnt matter if i clear the pick filter or not. when i uncheck navigate around obstacles, its working a litte better but anyway i very often have to stop and start the bot to get it working again.

then i was trying to use the polygon feature. this works even worse. first of all, the whole polygon stuff seems not to work very well. yes, i read that the map is not 100% accurate. but sometimes the bot walks wide outside of the polygon range.

anyway, here i even got the “idle” issue even when collision detection is unchecked. one litte change here is that the bot starts working again after standing still for 30-90 seconds with the polygon based training place. this wasnt the case before when using the radius.

i really wonder about that behavior. i got several other chars that doesnt have this issue in that frequency. it feels a bit like the bot hangs in some almost never ending loop. do you have an idea that im doing wrong?

When you have both of those options enabled it’s trying to create a path around the monsters. Since there’s so much crap nearby it can’t find a path so it doesn’t do anything. I can make it not do path finding if you use a polygon training area.

currently they use the polygon and stood still for > 7 minutes. so, i have to correct my statement regarding the difference between radius and polygon behavior. it seems to be randomly if the bot gets working again or not after a while.

well, what do you mean with “around the monsters”? i thought the 2nd option is to walk around unreachable positions like buildings, stones etc?

Yes exactly. Because there’s so many obstacles it’s trying to walk around them because they are close by. It thinks the monsters are near obstacles so it’s doing path finding.

are you sure? check this out: 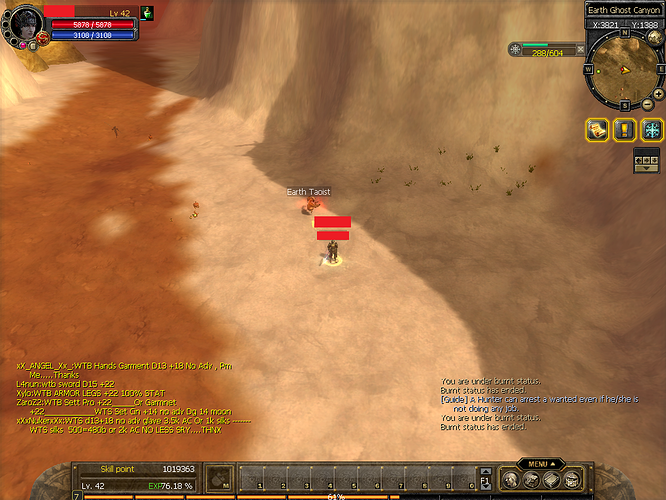 as you can see there is lot of space where he might walk to. fyi, this monster attacks my char all the time, my char just stands still and does nothing. after 3 minutes i just stopped and started the bot again. guess whats happend? the char started working again but instantly runs far from that monster and attacked some other one that wasnt attacking the char. very strange situation

I’m pretty sure. Turn off collision detection / navigate around obstacles and it will work.

both? what is collision detection used for then the 2nd option is turned off? whats the “difference” between them?

anyway this issue also appears when using radius, so this is not related to polygon.

when i turn them off, then my bot walks randomly and stucks somewhen at the mountain sides of the canyon. i thought this feature is right to avoid this.

It has nothing to do with your training area type. It’s trying to find a path and there’s too many obstacles for it to find a path in a timely fashion. This is the same reason why Roc mountain isn’t supported by path finding.

okay i see. thank you. damn