I’m trying to set up a plugin that sends messages to my discord server, through webhooks, when x character levels up, picks up a specific item, dies, etc. The problem is, I can’t import the discord_webhook library. Plugin fails to load. Is it because that library isn’t installed in the Plugins/python34 folder? If so, how would I install it on that folder so I can use it on plugins in the bot?

You’re pretty much on your own with that. You do need to bring the Python libraries for it.

Install a Python package into a different directory using pip?

This is very cool! I tried something similar but I just started to learn python

I tried to export the statistic data from all my bots in a database. Another program would then analyze and visualize the db and could propably send it to an app on android/iOS.
What do you think, @lucius?

Would you release this? Seems very interesting

emr41: Can you tell me how you did it

Installing the libraries? Follow the instructions on that link I posted. You’d have to install Python and pip in your system, and then add the discord webhook libraries to the Plugins/python34/Lib directory.

MajorBolt: What do you think, @lucius?

You could probably use the HTTP/FTP options on the Manager to upload character’s stats, and then use them on your app. Depending on which stats you want to show in your app, a plugin might not be required. However I’ve never used those options so I can’t help you with that. Seems interesting though, especially if you have a lot of bots.

NFSBloody: Would you release this? Seems very interesting

I was going to, but I hardcoded it for Silkroad Latino which is the server im currently playing the most. On top of that, it isn’t a “drop into the Plugins folder and go” plugin, as it needs previous libraries installation, having Python on your system path and having pip installed. I may work on it and release it at another time.

Right now it sends a message everytime someone picked up a rare item, completed a quest or finished collecting curst heart (herbalist quest to reskill). 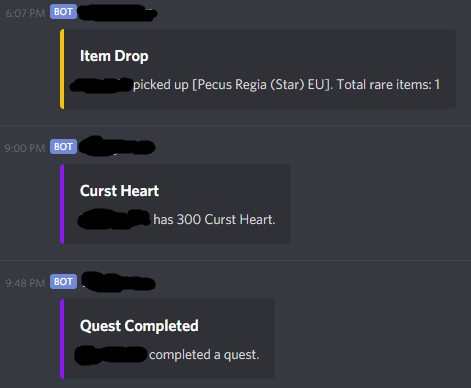 Do you mind sharing the code for noobs? hehe