The issue is it’s recasting immediately after the cooldown instead of when the buff actually ends?

after cooldown it will keep rebuffing

I believe this is because when you recast it the buff ends so the other characters are now casting it because it’s not active even though the other player is attempting to do so.

I think I have a working solution so just try it out in the next update.

This is a really tricky problem to solve completely. In the next version they might recast it but they should not recast again right after the cooldown. I’d have to redesign the skill system which is a bit too much work at the moment.

Bard is casting tambour and awesome world but it’s not casting dance (iSRO).

@rogal98 You’re using the latest version? Unfortunately vSRO does not have Awesome World so that’s going to be impossible for me to try.

Yes, the latest. Awesome world makes it possible to cast dance by just single bard in party. It has to be casted after tambur/hit march and then You can cast dance. 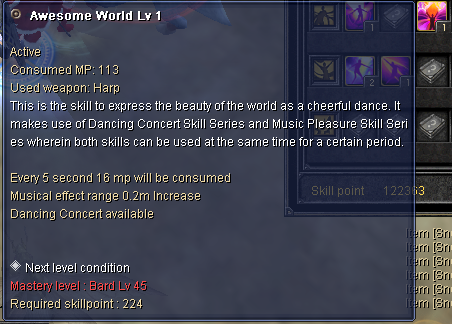 Idk if it would be possible to add this thing.

It’s supposed to be supported. I just can’t test it with the new buff detection. I think I see the problem but I need to borrow an account to test it.

Awesome World will work correctly in the next version and sockets will also be fixed.