Stamina socket could not be used

The socket of stamina could not be used :(. Other sockets could be triggered without any problem. Trying to build a condition for a socket of stamina I realized there is no such skill at the cast(inactive) list. The problem could be related to this. 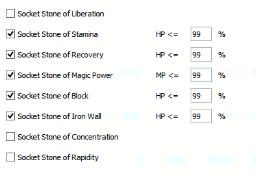 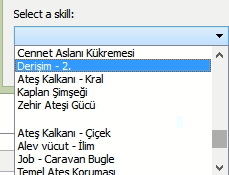 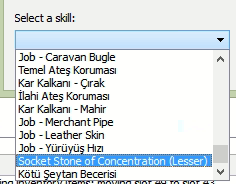 I don’t think you need add it as a skill in the buff. Simply check and boxes and that’s it. Try that to see if it will work.

Thanks for your reply. Nope, I’ve tried the second way when it didn’t work by checking boxes. Then I saw there exists no such skill. And I thought that might be the problem.

The stamina socket is a passive skill. I don’t think you will be able to add it as a buff.

The last time I checked it was active ^^ 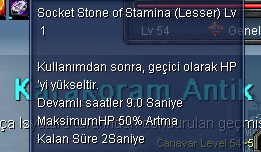 Up, this is important for my character to stay alive at emergency situations

is this the skill increases the HP? if so, mine is working fine. Instead of leaving the number at 99%, change it to 80% or 90% instead and see if it will work.

Yes it is the skill that increases hp. Doesn’t matter which number you put in there. Must be an issue with my server. Which server you play on?

Again UP’. I know you are busy with all that systematic things. Yet, this also is important, in my opinion.

It might not be triggered because of your Auto-Potion and everything else recovers faster than the threshold to become active. Maybe take a look at everything that affects HP.

UP!! Socket stone of stamina is still not working

Tested this on vSRO and it worked.

Oh I’m relieved that this could also be solved. For trsro the socket is useless. Can you test it as well? I wouldn’t mind sharing my character info for that @Ryan