My key bindings stop working after a while i dont know why
What i do: 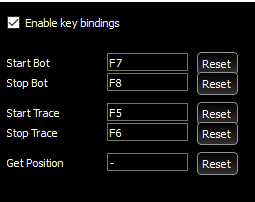 I’m not sure if I can fix that since the Windows API would be saying the key is not pressed so nothing happens in the bot.

@Ryan I tried to set up my keybinding to start bot and stop bot and repeated the same steps with the same keyboard shortcut for every single characters.

When I press stop bot on the windows of one specific character the rest of the party or I would say every single characters that have the same shortcut will stop botting. Is this a normal behavior?

Yes. Key binds are global and if you set them all to the same key combination they will all stop at the same time.

We have the start bot and stop bot via manager to manage large groups already. It would be nice when the key bindings only impact individuals. Just sharing my point of view.

Just turn it on for only the specific char? Lol

By saying specific, are you implying only one or more than one?

One… you want it on individual chars so why not just only turn it on the char you want?

it doesn’t work that way for efficiency. You will want to only spend your time to set the account one time then copy and paste to the rest. Imagine you are playing a few hundred characters at the same time. The ability to start and stop bot individually using shortcut without impacting other accounts will be a plus.

you make no sense… if you only want it to control one bot, only enable it on one bot

hey i did not say i only want to control one bot. So i am not sure why you are invalidating my opinion. It was simply my feedback from my personal experience using the bot testing after testing and with different implementations.

I suggest that you leave this to the developer unless you can change the way the bot work in favor of my user experience then I don’t think it is relevant for you to continuing to make an argument.

no arguement, just what your trying to do is already possible and im trying to explain that but ok have nice day

The ability to start and stop bot individually using shortcut without impacting other accounts will be a plus.

The ability to start and stop bot individually using shortcut without impacting other accounts will be a plus.

so you want it enabled on all bots but when you press a button it should stop only the bot you want?

and how would it know which bot you want to stop?

double click on the bot you would like to monitor from the manager to pop up the bot windows. Press the appropriate key to start or stop bot. When you do so, only the bot you are working on will be impacted not 1000 others at the same time. The ability to customize your shortcut is great but it will be amazing if this feature can also be added to make it as a whole package.

Hello there, are you still using keybinds. Sometimes checking and unchecking become unpleasant. When i need it immediately, it is really frustrating. Have you found a solution for this?

Hello @Ryan maybe it can be programmed such as it automatically re-checks the box with constant time intervals?

Thanks in advance for your attention.

Edit: And this makes me ultimately sad