Hey, i have the problem that if i start the client and enter my account etc, everything works fine. But after a DC the bot can’t relog because he gets an connection error. This happens with client and clientless as well. I think it might be the HWID protection of the server (probably SR_Poxy). Could you add a HWID support that you can login with phBot automatically? Really bad if i get a disconnect and the bot is not able to relog on his own because it doesnt send any HWID information to the client while logging in. The server i am talking about is HellFire Online but if its not working there it wont work anywhere with the same filter.

I hope you can do something about it.

@Ryan could you please add an option like “Enable sending HWID while logging in”? So everyone who needs to login with a HWID can use it and everyone else keep it disabled.

Doesn’t work like that. Each HWID for every server uses a different opcode and they must be sent at certain times. Some I have built in so I just need to add support for that one.

Ah i did not know that, thank you for clarification! Would be great if you add support for the server. Thanks again.

I’ll take a look and add it.

It should work next version. The main issue was that it wasn’t redirecting the client to the bot.

That sounds awesome. Is there a schedule for the bot updates or you release updates whenever there are enough things added/fixed?

Thank you for that version, after testing it i have two bugs to report.

First is that after a DC the account will reconnect but only to the char select screen which is empty. After hitting cancel at the char select screen it automatically reconnects again in the same client and then its working.
Second the condition “If Player not in Academy” is not working for graduation chars. It will not detect that the leader name is not in the academy list anymore after graduating and it will not execute the condition.

I would consider using the Manager. That issue sounds like the HWID is not being sent in time or something so there’s no character listing (you probably disconnected).

Edit: I need to look into the academy thing. I don’t think it’s removing players when they graduate or leave.

Ok then i guess i will use the manager.

For the academy to explain a bit more, i created the condition “If current level >= 40 && Player not in academy == MASTERNAME”; disconnect. But after reaching level 40 and graduating with that char, it stayed ingame because it was not detecting that it left the academy/MASTERNAME was not in it anymore. I hope this makes it easier for you to track down the issue.

When it leaves the academy does it still show the entire academy in the bot? How are you leaving the academy?

I leave the academy by the option from the bot itself under the academy section (which is sometimes kind of slow and will graduate after char is already 41+ [on high exp server]). I cant test if the academy is still showing right now, i have to edit this post tomorrow when i get home from work. By the way the option to join a academy from academy matching by name is also a bit slow and sometimes it takes a few minutes before the char joins the academy.

Sorry for the long delay. About this issue, even with manager 80% it cant re-login correctly with client. Bot will restart like 15 times before it can pass the char selection.

For the academy, i just tested it and the bot is leaving the academy but in the acedemy section it will just remove his own name. Master and assistants names are kept, i was the only graduating char so i cant really tell if it also keeps the chars <40 in. Here a picture of it. 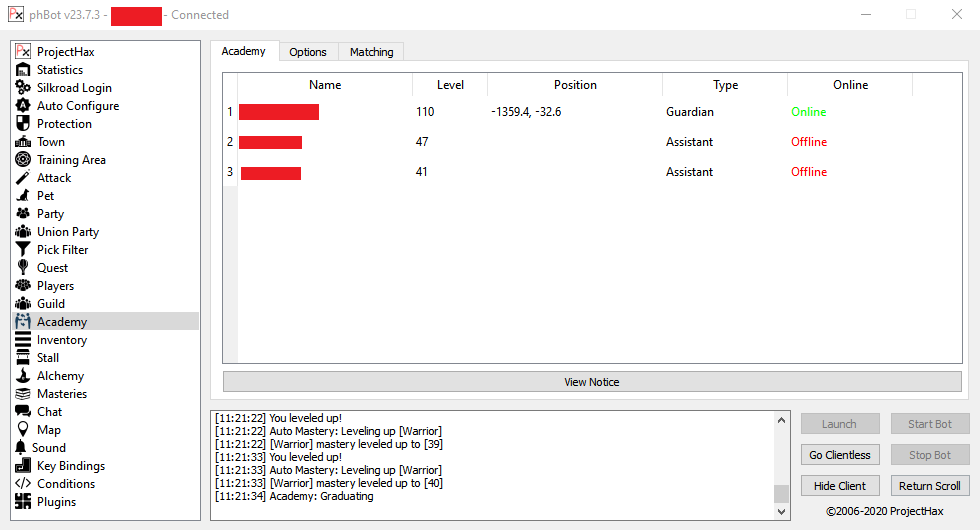 Did you find the reason why it keeps the charnames in? And if yes is it fixed the the newest testing version you have released?

And what about the reconnect issue? Is that still present?

Which server is it?

I have not looked at reconnect. There should not be any issues since the HWID was added.

I did not find anything wrong with the academy. Tell me the exact steps you are doing it in order for it to still appear in the bot.

I get powerlevel till i reach level >40 and the bot automatically graduates and keeps the names in. Maybe you can add the function that after graduation he is clearing the whole list.

It also apears in isro. When you teleport you will get the right names/ List @Ryan