Autowalk doesnt work for me. It doesnt matter if iam in Taklamakan or Roc Mt it everytimes shows the message: Script: Unable to generate a script for this location

After finishing town loop it just stop and this Message shows up.

Info: Im not in caves!

Caves are supported. What are your coordinates? If you are close to an obstacle it will not find a path.

you need use set coordinate too use autowalk

This is near an obstacle but when I was at taklamakan spot I’m sure there was 0 obstacles.

How to set the coordinates exactly? With xyz or only numbers with “,” between the numbers?

this is example for write coordinate 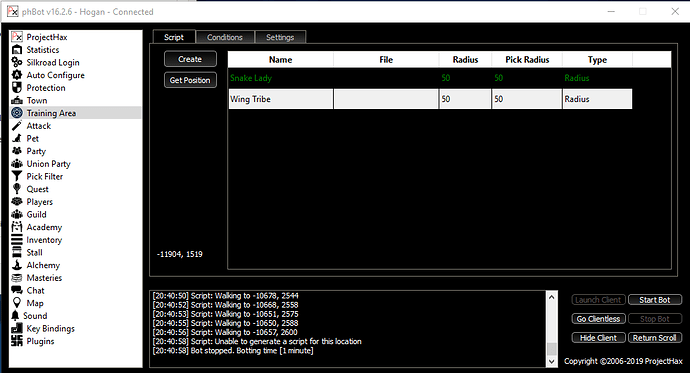 I have done all but still not working.

I have also installed everything new and set also the coords over the Manager on top of that what i have already done.

I have installed now the testing version and tried it again but still nothing happens. I have activated the option “Skip town script entirely” and this was the result:

For me it looks like the bot needs to generate a script which not works in both versions here. @Ryan any idea?

@jaya final Training place is now -5183, 2545 (Samarkand south so far away from obstacles)

No script found means you have a path set for one but it couldn’t be read. Clear the script.

@ben on your screen the final training area is not same di you right clik on training area set coordinate corectly and ok ? dont activate skipe town
i hop that help you

GM has disabled Auto scripting with PHBot. Thanks for the help!

I don t know exactly how auto scripting works but isn t it an offline function? if so the GM wouldn t have the option to disable u that functionality!

The only way they could prevent that is if they changed all the regions around so the coordinates are different.

Not sure if i should do a new Thread but i have the same problem. (New PHBot user coming from Sbot)
I clicked on “Add” then i tried with “Get Position” and after that with Set Position Coords are:
-12045, 2266 (I tried other spots too)

But everytime the townloop is done the bot stops with:
“Script: No script found, stopping bot”

File Path is empty and also (even its already clear) cleared the Script window.

This is working fine for me so I don’t know what you’re doing wrong.

Yeah… but what? I wrote what i did is there anything i made wrong? Or is there anywhere else a option that has to be turned on for autowalk do work.
I’m using the test version since (Recommended for private servers) and im playing on https://little.town/

Later i will try the Stable version.

If you are not starting it in one of normal iSRO towns then path finding will not work.