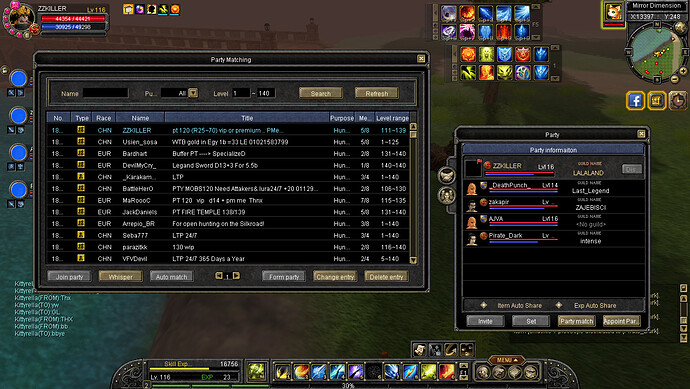 maybe the accept speed should be slow or something?

or palmyra have special invite coding or something?

maybe client for that server is slow? np … maybe phbot needs to be slowed/keep up or whatever coding it needs…!

The reason a party is a bug occurs when party match and invite do it at the same time. Because party from is created very quickly and thinks that he is at the party without perceiving that he is leaving the party. Disable the party match so that the party does not have a bug.

@Ryan as for you: I’ve only reported this problem to you 3-4 months in advance, and you’ve never been interested. I have a video, can I share it if you want? You can change the delay time to 5s for Party from.

change the delay time to 5s for Party

suggestion
an option to:
“delay interact with invite/accept/reform for[#]second”
option to select & to enter how long between 0~9

As I said, disable party match. Disable it if it is using another profile and is active. Log out of all characters, then log in. Do not use the Party match feature until the delay is added, You will not have problems.

This was fine until you wanted the delays to be lower.

The reason the party is bug is because it creates a fast party. Because, the client makes a party without sending a package, the characters and characters think they are at the party, and it becomes a bug. Then, I reported this event 3-4 months ago if you want to see when the party invite delay was added. The party is not about invite.

its a bit ridiculous to have to :
go client
leave pt
“ops im bugged”
go clientless again
then go client
“ops the whole game got crashed & was kicked from the server & now i have to wait for login line till my turn comes(for some)”
& ya sometimes the game kick u out
not just client crash & switch to clientless